To give you an insight into the types of companies that recruit successful RSI graduates, we have created these Employer Connection interviews. We recently spoke with Matt Kaczmarek, one of three partners who own TSC Air, a family run HVAC business in Tempe, Arizona.

Thanks for your time Matt; before we start, please tell us a little about you and your business.

TSC Air is a family business, owned by myself, my dad, and my brother-in-law. We officially started the company in Tempe in 2007, but in reality, my dad started it as a part-time gig back in Chicago 30 years ago when we were kids. My dad has been in HVAC his entire life. He was a facilities manager for many years, including close to 20 years with Motorola, at first in Chicago and then in Arizona after he got a transfer out here in 1997. Motorola was bought out by ON Semiconductor around 1999, and he stayed on with them, but by 2007 he was done. He didn’t like the way management was going, so he quit.

How did you get into business together in 2007?

In my time at ASU, I had a part-time job at Old Navy. I stayed with them after school and eventually went full-time and became a manager. Around the time my dad quit his job, I quit Old Navy. It wasn’t what I wanted to do with my life. Dad said, “Shall we start up this business full-time?” We had been doing it part-time, so we had a small clientele built up. We just decided it was time to commit to it properly. 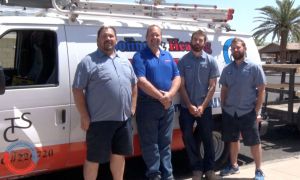 So how long have you been involved in HVAC Matt?

I went out on jobs on weekends with my dad from the age of 12, so I have literally grown up in this trade. My dad has taught me everything I know over 30 years. It’s been my full-time career for 14 years now.

Did you go to ASU for something in the field, like Engineering?

No, not even close! I have an Art degree with a minor in Anthropology! I had a tough time finding a job, which is why I was at Old Navy! I did go to RSI for my refrigeration license; I went there to get my certification to be able to work with freon and all that.

That’s awesome. How has the business grown?

Including the three owners who still work in the business, there are ten of us now. None are seasonal. We have four full-time techs, my sister is our office manager, plus we have a scheduler who works from home. I just did some interviews a couple of weeks ago. I’m looking to hire more people right now. I’ve got three people doing ridealongs this week; they are all from RSI actually. I’ll probably hire at least one, if not two.

What services does TSC Air offer?

Our focus is providing residential HVAC services, that’s the work we prefer. We do a little light commercial, but I’d say 90% of our business is helping homeowners with their air conditioning. We do everything from installing new systems, to service, maintenance, and repair. Something that makes us a little different to other companies is that we don’t have separate departments. We don’t have an Install team or a Service team, our guys learn everything. That’s the model that allows us to keep guys on in the winter. We transition them to maintenance and service. We don’t want to let people go, that’s part of our philosophy.

How long has the relationship with RSI been in place, and what graduates are you looking for?

It’s been maybe three years. It started with one of the instructors, Guy Caldwell; he’s been a great resource for us. Guy has passed along quite a few names, including Fernando who is now a lead tech for us. Fernando has been with us almost a year now and he’s been great. Instantly when I brought him on, I knew that he was going to be awesome. In the last five months, we have hooked up with the RSI Career Services team. The last batch of graduates came from them; they sent me 20+ résumés from which I selected candidates for a group interview two weeks ago. 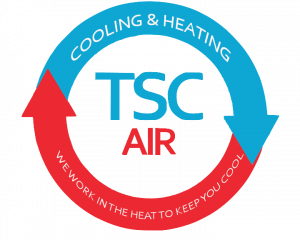 Talk us through your recruitment process?

We’re still working out the kinks, but the process is basically this. I do a phone interview first, then I bring them in to an actual in-person interview; this last time was the first group interview that I’ve done, but it worked out well. From there, I do half-day ridealongs where the candidates go out with one of our guys to see how they do. That’s more of a test. Sometimes people interview well but that doesn’t translate to doing the job well…and vice versa. Somebody might not interview well but they might be great in the field. From that, I talk to my guys to see how everything went, and then make an offer from there.

Do you have a formal training program?

Nothing formal, no. But once a graduate starts, they are paired with somebody for at least a month;  they do some training, get used to dealing with customers. It’s usually a minimum of a month, up to a couple of months depending on how comfortable they are. Usually most of our work is done by two-man crews anyway, so it’s not like they are sent off on their own after that. We also have a training app that they have on their phone – Trainual – so they have access to that while they’re on the job.

You’re a small company, but do you offer your staff benefits?

Firstly our people are hourly, they are not commission based. We have monthly bonuses if the company meets its monthly sales goal. We also offer a ROTH retirement plan after they’ve been with us for a year; we match up to 3% contributions. We also have PTO days; after 90 days you get five PTO days. Then after a year, we bump that to seven days. Once they’ve been with us for four years, they get ten PTO days.

Sounds like you have a great company. How many RSI grads do you have working for you?

Two of our current employees are RSI graduates. I’ve mentioned Fernando, and we have Keith who has been with us almost three years now. But as I mentioned, I’m about to hire one or two more.

What makes RSI graduates stand out when you are looking to recruit?

So far everyone we have hired has had a really good base knowledge, a good background on how everything works. That means we don’t have to go into the details; it’s a matter of getting them into the field and used to doing the work. Fernando was ready to go; we did some training with him and quickly realized he didn’t really need training. That’s why he’s gone from a junior tech to a lead tech in less than 12 months.

What kind of qualities do you notice in the RSI graduates who go to work for you?

Their work ethic and attitude. That’s what we hire mostly on. We focus on getting people right out of school, so they don’t usually have a lot of experience in the field. We’re okay with that. I’d rather hire on attitude than experience. I can teach somebody how to do the job, but I can’t teach a positive attitude. It’s definitely a team atmosphere here, a family atmosphere, and we want everyone to fit in with that vibe  and bring a positivity that lifts everybody up.

Why do you like to hire people fresh out of school?

Do you ask the school about attendance?

I haven’t actually, but that is a good point because that is something we do focus on. It makes sense. We need people who we know are going to show up and not be late. If it becomes an issue, then we deal with it. But if they have the right attitude and work ethic, punctuality usually comes along with that mindset.

Does the hands-on experience they get at RSI help?

For sure. That’s kind of why we went with RSI. They do a great job with the hands-on stuff. That’s actually something I’m working on in a corner of our warehouse; a training set-up with a working unit they can train and troubleshoot on.

What advice do you have for students to be successful at RSI, and in the field?

The main thing is attitude and work ethic…both at school and on the job. Those two things are what will catapult you. It’s all about having a good attitude, being energetic, and participating in everything. It’s obvious when somebody comes in and they have that good attitude; you can tell that they are eager to  learn and eager to work. That makes people stand apart during the interview process for sure.