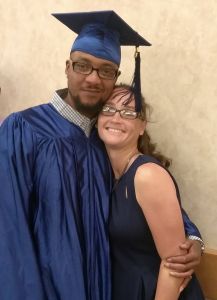 Justin, 35, from Sierra Vista, Arizona, had worked a bunch of sales jobs before enrolling in the Electro-Mechanical Technologies (EMT) program. He graduated in September 2016. We spoke with him the week after his graduation.

Thanks for your time, Justin. What made you decide on an HVAC career?

I wanted a career path. I’d been working in and out jobs for a long time. I decided I needed to change my life. They have a light rail system that runs through Phoenix; I’d see guys getting on and off with these RSI shirts and hoses. I didn’t know what the RSI on their shirts was, and I always wondered where they were going. So one day I got off the train and followed! I found out that it was the Refrigeration School, discovered what they were doing, took a tour, and signed up!

So you had no idea where you were walking into?

Not at all. I was just interested in the equipment that these guys had. There were a lot of younger guys, so I was curious as to what exactly was going on. I’m born and raised in Arizona, so when they told me I could learn a trade involving air conditioning and refrigeration, that made an awful lot of sense to me.

What was your favorite part of the program and why?

Why did refrigeration appeal to you?

Because air conditioning is seasonal and refrigeration is year-round. Every bar or restaurant, every grocery store, needs refrigeration. I just figured that would be a definite plus for year-round work. Another plus was that a lot of it is inside; you don’t have to crawl into attics or anything of that sort.

What did you enjoy most about the school?

It was definitely a challenge, but all around I liked it. I enjoyed the hands-on aspect; the instructors explained things well. It was good. I hadn’t been to school in about 15 years, so it took me a while to catch on. In fact I had to re-do the first phase, but once I buckled down and developed good study habits, I was able to catch on. I didn’t have any more trouble throughout the program.

I understand you were offered a job before graduation?

That’s true, but it’s been a long process. There’s an acceptance process, a physical, a drug test, and then I’ll start training. I’ve signed a contract. They told me it would be a long process, but it’s been about four weeks and I haven’t started yet. Honestly, I don’t know how much longer I can wait for them. I need to start working and earning. I’ve got my qualification, so pretty soon here I’m going to start applying elsewhere. I know that all I need to do is get out there, and things will start happening.

How did that opportunity come about?

When I first started my Student Advisor suggested I go to all the career fairs. At that point I really didn’t understand anything, but I went to the first fair and met a gentleman there from TDIndustries. We had a great conversation; then after the fair, we ran into each other again. He told me I should stay in contact; there was something about me he liked. He gave me his personal number, so during Phase 7 once I knew what I was doing, I called him up and let him know I was still doing well.

We met again at the next career fair, and he told me to send in an application the next week. A couple of weeks later I went for an interview. It went really well. In fact, they asked me to hang around for a few minutes and gave me an offer letter on the spot. I accepted the offer and signed the contract. So it’s taking a while, but I hope it works out. If not, I’m confident I can get something else.

So what plans do you have for your first HVAC paycheck when it comes?

I just want to save; maybe save for a house, and look forward to new opportunities in life.

Do you have a family Justin?

I have a 13 year old son, Justin Jr, and a fiancé, Nichole. My parents still live down in Sierra Vista. My father was in the military. He was stationed down in Fort Huachuca.

Once you get started, what do you think your favorite part of this job will be?

I think it’ll be a mix of three things: the self-gratification of applying what I’ve learned, being able to help people, and continually learning more. Knowing that I’ve been called in because there’s a problem, then being able to troubleshoot it, fix the problem, and know everyone is happy will be very gratifying. Being a specialist is important to me. Being able to fix a problem, and being able to thoroughly explain why there was a problem and what I’ve fixed – that’s important to me. When people spend a lot of money, and it is expensive, they deserve an explanation of the work behind the price.

Where do you hope your career will be in three years?

In three years I hope to have completed the Mechanical Maintenance Engineering program at RSI. So I’d like to have another degree, have a solid foundation for my family, and just be living positive.

Would you like to work for yourself one day?

I’m just taking things step by step right now. I know that’s a definite possibility for the future, but I want to learn as much as I can before I make a decision like that.

What’s your dream job in the HVAC field, Justin?

My dream job would be to design boiler systems. I’d also like to help others learn like I learned. When I was going through school, I had a lot of gentlemen who asked me for help, or that I would go to for help.

It sounds to me that you might enjoy teaching HVAC when you’re older?

Yes sir, my mother was a teacher for 32 years and my sister is a professor at Arizona State University.

Did you leave RSI feeling that you were on your way to becoming a specialist?

Definitely. I feel super-confident, very confident in what I learned at RSI. Nobody can learn everything there is to know about an industry in eight or nine months, but you can get a real good foundation.

Did you make some good connections at school?

Yes, it was a real good group that I graduated with. I met a lot of bright young men from different areas. A lot of their families own air conditioning companies. I’ve got a lot of contacts and networking numbers.

What do you do for fun?

I enjoy spending time with Nichole. I’m a peaceful guy; I enjoy reading, walks, nature, and just enjoying the sights.

I’d take my mother, Betty Davis, on a trip – wherever she wants to go! 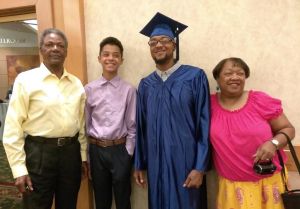 Justin with his son and parents

What a good son! Are you parents proud of you?

Extremely. My father, Roosevelt Davis, was in the military for 28 years so I was raised on a very solid foundation. My past life was a little mischievous, but I’ve straightened out and my parents have definitely let me know how proud they are. Both my parents and both my sisters graduated, and now me! They all attended my graduation last week, and to be honest, my dad tells me that he’s still in shock that I did it!

Never be discouraged, always believe in yourself, and never give up. The power of believing in yourself is amazing. I used to doubt myself, not believe in myself. Now that I’ve accomplished this, it’s opened my mind to doing so much more. I know that anything I want in life, all I have to do is apply myself to it.