Angela, 22, from New York, has been in Arizona for eight years. Angela is a member of the first class to graduate from the RSI Welding Specialist program. She graduated in August 2018.

Thanks for your time, Angela. Does that mean you’re the first female welding graduate from RSI?

One of them. There were other women in class with me. We got to go through it together, but I was the only pregnant female! I was welding the whole nine months of my pregnancy.

Wow! What did you do before RSI?

I was having kids and working different jobs. I have three kids now. My son is five years old. I have a three-year-old daughter, and now a four-month-old daughter. I worked fast food jobs like Papa John’s, Subway, Del Taco, stuff like that.

A couple of years ago, I started working at Price Industries as a laborer through a staffing agency. I saw people welding there. I didn’t even know what welding was, but I was curious, so I went over to the booths to learn more. I soaked in everything. They let me do a little welding. After I did it the first time, it was like a fire had been lit in me. I really liked it. I just wanted to keep welding. That was my spark. It was amazing. All my life I’d never known what I wanted to be until that moment. 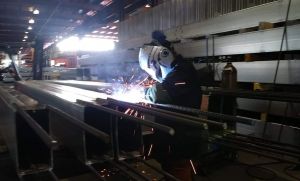 Is that when you decided to go to welding school?

After three months at Price, I thought I was getting better at welding. I was intrigued and wanted to do more. I left Price and went to Schuff Steel in Eloy. I started as a production helper because the wire they ran was unfamiliar to me, but I did pretty well. I ended up fitting, welding and grinding there. Three months later, I found out I was pregnant. I left and that’s when I decided to go to school. I searched for welding schools, and RSI was the first to pop up. I went in, checked it out, liked what I saw and signed up. That was it. I just wanted to do it.

What was your favorite part of school?

I really enjoyed the hands-on. I didn’t expect it to be as hands-on as it was. I also liked the fact that if I couldn’t get something, there were always instructors available to help. I liked that I had many tries to get things right. It wasn’t a direct pass or fail. They give you time to practice before you submit your test. It was a fun process. It wasn’t boring like sitting in a college class all day, not wanting to be there. Honestly, it turned out a lot better than I thought it would.

How was the welding program? Did you find it hard?

My mom was sick and passed away from cancer while I was at RSI. She helped me pay for my schooling before she passed. It’s crazy, but the day she passed I was at school and all I kept telling myself was “I’m not going to let this money go to waste, I’m going to do this.” But it was really hard. I was pregnant, I had two young kids and my mom, the closest person in the world to me, was dying. But I was still able to make it through.

Our condolences, and congratulations for seeing it through. Did you start welding after graduation?

I didn’t go to work right away. I had my baby just after I graduated. I was a stay-at-home mom for a couple weeks, then went back to work at Papa John’s again. I kept asking myself, “What am I doing here? What did I go to school for?” You know what I mean? Then my boss was really rude to me. It made me rethink my position and what I was doing. What did I go to school for? To get disrespected? No. So I left.

What did you do next?

I really wanted to weld. My boyfriend is a welder; I was jealous that he was able to weld and I wasn’t! I contacted Rick White [Career Services Director] at RSI and told him I was ready to go back to work that day. I asked him for some leads, and the first place he gave me was Powers Steel & Wire in Tempe. I got the job then and there, no problem. That was in December, and I started after the Holidays in January.

Are you happy with the money?

They gave me what I asked for. Of course, you always want more, but you’ve got to start somewhere! I’ve never made as much money as what I’m making right now.

I’m building columns and rafters for solar panel frames. I’m MIG welding galvanized steel. I’m the only female working there, and I’m one of only four welders. I work from 6:00 a.m. to 2:30 p.m., sometimes later. I try to get there for 5:30 a.m. because it keeps me disciplined.

How is it being the only female welder?

It’s good and bad! I’ve noticed there is a lot of man drama! I thought as a female we’d be full of drama, but man drama is worse. Being a woman in the field, you’re always going to have the guys who like you, the guys who talk crap, the guys who on’t want anything to do with you because you are a female and they think you shouldn’t be here. It’s always going to be like that. But I try to be one of the dudes. My boss doesn’t treat me differently’ he tells me to do this, do that, and I have no problem with that because I don’t like being treated differently.

I have multiple goals! I’m not just going to be a welder, I have a lot of things going on in my head. I have a big plan and I’m going to get there. There’s no stopping me! The possibilities are endless. I’d like to open two different businesses. One in welding, maybe a little shop in a garage at first, and one with Herbalife because I’m seeing results with that myself.

What advice do you have for new students just starting out?

It’s not easy. Treat it like a job. Get there on time and give it 100% because it’s only going to benefit you. Focus on yourself. Drop the hood and do what you’ve got to do. Don’t get distracted. Stay in your head, know what you want because it’s a long seven months. You’ll have good days and bad. You struggle, you push through, and things will always work out. Everything happens for a reason.