Courtney, 21, from Puyallup, Washington, graduated from the Electro-Mechanical Technologies (EMT) program at RSI in July 2018.

Thanks for your time, Courtney. Did you go to RSI straight out of high school?

Pretty much. I went down to RSI three months after I graduated high school in 2017.

Had you always wanted to work in HVAC/refrigeration?

No, I wanted to be a veterinarian! I did some serious research into it and realized I’d have to go to school for nine years! I wouldn’t be working until I was 30, and be in big-time debt! It didn’t sound good to me.

So where did the interest in RSI and this career come from?

My dad works on refrigeration containers at the Port of Tacoma. A guy he works with, his son went to RSI. He did the six-month Refrigeration Technologies program. He highly recommended RSI. This was before I’d even heard of the school. He said all the teachers were great and they made it super easy to learn. It just sounded interesting to me. I’ve always been into working with my hands. We have HVAC schools here in Washington, but I’ve heard they are not as in-depth as RSI. I wanted to give RSI a shot.

Had you any related experience? Ever gone to work with your dad?

Not really! Honestly, I didn’t even know what an air conditioner was before I started at RSI. It was just a thing on my back porch that blew air. I had no idea what I was getting myself into. My dad told me it’s a good industry to get into because there aren’t many people doing it, and it might be something I’d enjoy.

I loved going to school there. It was one of the greatest years of my life. It taught me to come out of my shell. There were lots of older men in my class. I was worried I wouldn’t make friends. But I was wrong. I made a lot of great friends. A couple of the scariest guys became my best friends, my bodyguards. We are still in touch! I also became more confident about going into the field. It was a great feeling to come home and know that I was ready to work. Feeling I had accomplished something was my favorite part.

In only nine months!

I know. My friends are in school, and they’re not going to be done for four or five years. I can say, “I’ve learned this trade in nine months, and I’ve already started my career!” They are like, “What? How?” I was fortunate that my parents set aside money for school, so I’m debt-free and excelling in life.

What class did you attend? Did you work while at RSI?

I did the morning class until 12:30 p.m., then I went to work at 2:00 p.m. I worked at O’Reilly Auto Parts in Chandler. It was perfect. I’ve always been into cars and always wanted to work there. I really enjoyed it.

Tell us about getting a job.

I came home three days after I graduated in July 2018. It took me about six weeks to find a job because I was trying to catch a big fish right out of the gate. I wanted to work at the Port of Seattle or Port of Tacoma because that’s what my dad does. I decided to shoot for that first. I went for an interview, but I wasn’t what they were looking for. I had no experience.

So what did you do next?

I found a job working for a commercial HVAC company on Craigslist. I worked with them for 11 months through August 2019. They were a great first company to work for. I did a lot of maintenance stuff for small businesses. I’m very small—5’2″—and having to pack around a big extension ladder was a mountain for me to climb. I’m not really the strongest person I know, so a lot of people asked if I needed help.

How is being a woman in a male-dominated field?

It’s just very foreign for men to see a woman doing this stuff, especially now that I’m working in refrigeration. It’s almost unheard of for a woman to do what I do. There are women going into HVAC, which is great, but it’s still pretty rare for a woman to do refrigeration. It throws people off for a minute, and so they watch to see how I maneuver and do stuff. At school, I was the only girl in my class, and I look like I’m 13, so I was really nervous to start with. I felt there were eyes on me, a lot of pressure.

How was your first paycheck?

The only other job I’ve had, at O’Reillys, was minimum wage. I worked a lot of hours and every two weeks got $700. I’d never had that much money in my life, it was insane. My first paycheck in HVAC was almost as much, but I got paid weekly! I was impressed and happy that, at 20, I was making almost twice what I made before. That was exciting.

So what did you do in August?

I joined the Local 32. The union covers plumbers, pipefitters, and HVAC and refrigeration techs. My last job didn’t have benefits—no vacation or insurance. The pay was okay, but I felt I could do better now that I had some experience. My dad and a couple of friends who work for commercial refrigeration companies encouraged me to get on the union train, to sign the book and get my résumé out there. I’m still going through the process of becoming a member, getting sworn in and all that. It’s kind of a lengthy process.

Who do you work for now?

I scheduled an interview with the guy that works with new people coming into the union. I took a test to get a baseline for what I know, then he asked me if wanted to do HVAC or refrigeration. During my last phase at RSI, I decided I wanted to get into refrigeration. So he sent my résumé out to a refrigeration company called Refrigeration Unlimited Inc. (RUI) that does jobs all over the country.

I had an interview with the guy that manages the construction side of RUI and he decided to take me on. I never pictured myself doing construction. They looked at me and quickly decided I wasn’t going to be packing pipe or moving cases around the grocery stores we’re building, so I’m working on controls for the most part. Today I’m at a Costco in Oregon. I’m troubleshooting why chiller alarms are going off and why the cases aren’t cold enough. A lot of technical stuff that surprisingly not a lot of people know how to do. 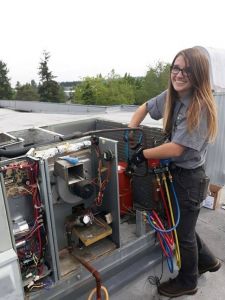 Using my brain. What I’m doing now is more of a brain game than using my muscles. Doing the technical stuff the last couple of weeks has been fun. It’s great figuring things out. It can be very rewarding.

The apprenticeship is going to take me five years, so at 26, I’ll journey out. From there I can go wherever I want, and at that point I’ll see how I feel about RUI. I will stay with them throughout the apprenticeship at least. So that’s my plan for the next five years.

Don’t give up. Try to stay after school and look at the troubleshooting boards longer. Take advantage of being there. Try to make school your priority. We had people drop out because of personal struggles at home, or because they didn’t have time to keep up. My advice would be to try to overcome those external conflicts. The rewarding feeling when you start to understand everything is great. Some phases were more difficult than others, but once I got past them and onto the next thing, the puzzle pieces connected. I’ve spoken to a couple of people I knew who dropped out. They both wish they had stayed in school. Stick with it and be confident in yourself.