Thanks for sharing your story, Robby. What you did you do before you came to RSI in 2017?

I was an outlaw biker. I’ve worked in construction, and I’ve been in the moving business—a family business—since I was seven years old. To be a real Outlaw you’ve got to have a job.

In 2017 I’d owned my own moving business for a couple of years, but it wasn’t going anywhere because I didn’t know how to run it. We had a baby on the way, and I decided I needed something steadier. I walked into RSI, and I told Grace (Assistant Director of Admissions) what was going on with my life. I was pretty much crying; I didn’t know what to do, my bills were adding up, and I was getting ready to lose everything. She said, “How about you come to school, get a trade, and start again?” I said that would work! 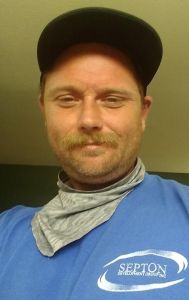 Did you have any concerns?

I did. I told Grace that there isn’t a school in the world I couldn’t ace, but the one thing I asked is if they would back me. If they would help me get into the field—get a job—after school, because I have multiple felonies on my record. Grace said they would, and that they could almost guarantee me a job if I put the work in. I didn’t want to go through school and not be able to get a job afterwards because of my past.

Why did you choose RSI that day?

One of my dreams used to be—it still is, I guess—to design my own freezers. I’m not talking freezers like you put in your house, I’m talking commercial 50-60-bay freezers. I wanted to design, operate, and maintain them myself. Failing that, I really wanted to be a maintenance supervisor at a big mall or somewhere like that. But I realized that path wasn’t going to work for me because of my felonies. I thought I’d never get a job, so I had decided not to go that route in the past.

When I talked to Grace, she let me know right away that there would be places that would never hire me. She actually gave me a list because RSI works with those companies and knows they won’t hire felons. But she also said there were plenty of places that would hire me.

How did that make you feel?

It made my mind up. RSI taught me how to sell myself. I’d changed; my felonies were eight years earlier and I wasn’t on parole or probation. I was devoted to doing the program. I had to stop for two months because we had the baby in the middle, so the program actually took me 18 months to finish. The cool thing was, I got to jump back in where I left off. The school was very, very helpful to me.

Tell me about The Ambassadors Club.

To show my gratitude, I suggested we start a program with students who were willing to help out other students. Names flew around, and finally my friend Jamie came up with The Ambassadors Club. Three of us started it, It’s still an organization today. One of the things I did to help was take in a student who was sleeping in a broke-down car with his wife, two kids and a dog. He was struggling at school, so I took them in, even the dog. I let them stay with me. That’s why I think the Lord has paid me back for things too.

I liked that from the very start we were getting our hands wet; it was 50:50 classroom and hands-on. You are going to have a meter in your hand and you’re going to be testing things on your first day. I also liked that the classes weren’t too long. I didn’t get bored. I think they were like five or six hours. Each phase wasn’t very long either, like maybe a month. So that was great, too.

Did you sign-up for the MME program to start with?

I started with the EMT (Electro-Mechanical Technologies) program but a month before that finished I decided to continue with the degree program.

Why did you decide to do that?

Being a felon, I thought it was only a short amount of time to get an associate degree rather than a certificate. I thought having a degree on my résumé would help balance out the felonies. I had to do whatever I could do to make myself and my résumé sellable.

Where are you working?

I work for Septon Development Group, a commercial general contractor based out of Scottsdale. I represent the general contractor on the job. I manage a lot of subcontractors. I’m basically the person they come to if they have questions. So I have to know everything about the build, what will pass code, what won’t.

I’m OSHA (Occupational Safety and Health Administration) certified, so I have to make sure everyone is safe. I have to document and log everything. I move from job to job. We’re based in Arizona, but I’m now in Vegas for seven weeks. We are working on a pharmacy expansion, putting in a mini-clinic for CVS.

Talk to us about getting the job.

The company went to RSI and asked if there was anyone they would recommend, and Career Services put my name forward. In the beginning the job hunt didn’t work out for me; other guys were getting hired before we even completed the program. But it took me a year, until January 2020, to land this job. But this job is a blessing, and one of the coolest jobs I could ever wish for.

I actually tried to turn it down, thinking it was going to be like every other job. I come in, do the interview, then they find out I have a felony and they won’t let me work for them. I was up front; I said it sounds great and I appreciate it, but I’ve got at least 13 felonies. I don’t think you guys will hire me. That’s when the guy stopped me; he told me they were aware of everything, but that was in my past. He said they were also aware of my degree and the that I was highly recommended for the position by the school.

Do you think the delay because of your record?

Yeah, it was. But this company believes in second chances.

My short-term goal is at least five years with this company. With my degree, I would love to have a project manager position here within two years.

The reason I say that is being an old outlaw like me, besides working for my family, everything I’ve done has been on and off. To have a real job like this, I can’t even explain how blessed I am to come into this place. This place is like a family. As of right now, with everything I’m learning, I don’t plan on leaving this company unless my shirt says “Conboy” on it instead of “Septon.” I know that my degree isn’t worth anything until I’ve got some experience. This is just a blessing. It’s like a vacation; I get to run around with all these tools that I spent all this money on. It hasn’t got to the point yet where this is work to me.

Are you happy with where you are financially?

Yes. I want a chance to go bigger, but as I’ve said, I need the experience. Once you’re in with a general contractor, it’s a good opportunity. I don’t know what’s to come. I just hope the company likes me, advances me, and the pay gets a little better. But if it doesn’t, I’m still very pleased with what I’ve got.

Tell us about your family.

Amber, my wife and I, got married in 2015, and we have three girls, aged between three years and six months.

You’ve got to want it! As an Ambassador, I used to tell everyone that if I didn’t get what the teacher was saying, I’d get in their face until I got the answer I needed. I would make them give me the time I needed. So, to get the help you need, you have to raise your hand! Talk to the teachers, talk to the Ambassadors—that’s why they gave us red shirts instead of blue.