Guy, originally from Washington state, is an HVAC Instructor here at The Refrigeration School (RSI). Guy has been with RSI for over six years, with 18 years experience in the HVAC and electrical fields.

Thanks for speaking with us, Guy. Tell us how you came to RSI.

I owned HVAC and electrical businesses before I came to RSI. I worked for a few companies before I opened up my own businesses. I ran them until I was done being a business owner, and then I sold them.

So why did you decide to go into teaching at that point?

I realized that the whole time I was in business, I was actually teaching people. I was training everybody to do a good job. There are so many untrained “professionals” out there that I thought coming to RSI, being the tip of the arrow, training future HVAC and refrigeration technicians would be right up my alley.

As a boy what did you want to do when you grew up?

I wanted to go into computers. I wanted to do repairs, programming—stuff like that. But when I realized how much sitting and staring into a computer screen bugged me, I quickly decided against that!

How did you come to this field then?

I worked as an apprentice electrician for my uncle and decided my talents lay with my hands-on skills—moving around and doing repairs. Initially, it was a toss-up between HVAC and electrical because, at the time, I couldn’t decide, but HVAC won out. Later in my career, I ended up working for a company that had a full electrical department, and when it got slow in HVAC, I logged all my hours anyhow and became a certified electrician as well. 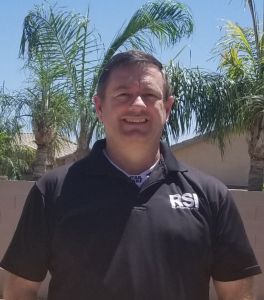 You went to a trade school in Washington. How did that school compare to RSI?

I didn’t want to be in school longer than a year, but I ended up in a two-year program. During that whole time, I was thinking I could have learned this faster. But I walked out of there with an associate’s degree, which, later on, helped me an awful lot.

That’s a nice thing about RSI. You can go to RSI for three, six, nine or fifteen months [depending on the program you choose]. RSI offers you the ability to get an education and get in the field quickly. If you want that associate’s degree, however, you’ll get it with just a few more months with the MME program. You can add it on to the end of your program, or you can come back and finish it up. You can even do it online if that helps with your work schedule.

I no longer wanted to be a business owner in Washington. I’d done that and succeeded. I decided that if I wanted to open another business in the future, it would be in a business-friendly state that didn’t have snow. That limited my options greatly, and Phoenix won, hands down! I actually came here to interview for jobs with six different HVAC, refrigeration or electrical companies.

While I was in the hotel for a week of interviews, I saw an RSI advertisement. I asked my wife what she thought about me teaching, and she said, “Why not?” I sent in an application, got a call the next day, and was hired to be an HVAC Instructor. I actually started in electrical, but I was licensed and skilled in that, too. I taught Residential Electrical and subbed in commercial here and there. Then I moved to the HVAC side. I’ve actually taught every phase at RSI at one time or another, except for the low-temp stuff.

In addition to training them, I like to keep the students motivated and talk to them about their new career. I love to get comments from them when they’re done and are out working. When the students tell me thanks for everything I’ve done, that they’ve got a great job, that’s what keeps me going. Being such a well-known school, there are always employers waiting for our technicians, so it’s fun to see where they go.

I make props and costumes for movies, TV shows and fan films for conventions. It’s a business, but it’s more of a hobby that pays for itself. I build anything that you can think of that is interesting and fun that has a movie basis, or from comic books.

If you weren’t a teacher and you could pick your job, what would you do?

I’d go back into the service industry and be an HVAC or electrical service tech. I absolutely loved that. There’s nothing better than getting a service call from someone who is having major problems. You go out there and fix it and feel like a superhero!

My grandpa. He passed away a few years ago. His nickname was Guy. That’s where I got my name from.

What’s the best piece of advice you’d give to prospective students who are considering RSI?

I never downplay the money-making abilities of a trade school graduate. I have never been without work. I have always had money to pay bills and was able to raise my family. RSI provides great training that can last a lifetime. With HVAC, electrical and now welding now, you can work anywhere in the world and make good money from it.

What’s your favorite tool? What could you not do without?

The tools that made me the most money were my favorite! My meter and gauges. If it’s a refrigeration problem, you need your gauges to diagnose it. If it’s an electrical issue, which most service calls are, you need a good meter to troubleshoot that. Once you diagnose the problem, you price it out, talk to the customer and start making money!

Thinking of your time in the field, what was your favorite part of the job?

Service is definitely the thing I enjoyed the most. I loved the satisfaction of fixing something and making somebody happy. But I will say that installs are a form of artwork. When you put all the ductwork and system together from the ground up, when it’s done and pretty, it’s just a piece of art. So I enjoyed that part of it as well.

When you gou get an unexpected afternoon to yourself, what do you do with that time?

If my wife was available, we’d go on a little road trip. If it was just me, I’d either go to a movie or go build some more costumes!

If you were to tell someone “Thank You” for making you who you are today, who would it be and why?

My wife Jill, for sure. Jill and I have been married for 25 years and, believe it or not, I would also have to say thank you to my in-laws Ruel and Alice. We were starving students back in the day, but if we ever needed anything, they were always there to help.