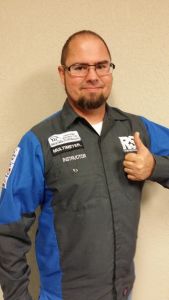 Jay, aged 41, has been with RSI for almost five years now. He has been in the refrigeration field for about 18 years. Before teaching, he worked for various companies and did contract work on the side.

What class do you teach?

The main class I teach now is Refrigeration Systems and Practices, so walk-in freezers, refrigerators, ice machines, etc. I’ve written my own curriculum for this phase, and the workbook that goes with it is currently being printed. We’re waiting for the first copies to come out. But during my five years at RSI I’ve taught a bunch of different classes, including the Fundamentals of Refrigeration, as well as the two Comfort Systems classes – Commercial and Residential.

What made you decide you wanted to teach?

Basically my wife and children. Refrigeration is a year round field, and I would regularly do 70-80-90 hour weeks. There’s no clear seasonality like air-conditioning. By about year 10 of my marriage my wife came to me and said, “your children don’t know who you are, you’re never home, and I’m going to leave unless something changes.”

It was true; she was right. The last week that I worked for another company before RSI, I worked 107 hours in 8 days. My son was about 3 or 4 at the time and he called me by name, not “daddy”; my daughter was 10 or 11 and had little to do with me. The money was great, but my wife didn’t care how much money I made, they just wanted me home more.

Are you glad you made the change?

Oh yes. I like it here; it’s fun. I get to tell the same stupid stories every 20 days to people that have never heard them before. My wife and kids have heard everything I’ve had to say about the places I’ve worked.

I like being able to take people, some who may have a background like mine, and help them make their lives better. When you have something that matters, then you try that much harder. If your job is pushing a button at a factory, there’s no trying to do things better. I like that what we do is important, critical even, to customers. I’ve worked on an ice machine at a house in Scottsdale so the customer’s pool party didn’t suck, and I’ve worked on systems where if they break down, the company stands to lose a million dollars for every hour it’s not fixed. Both are critical to those customers, just on different scales.

RSI chose me. God pointed me in this direction randomly. I’d never gone to a temporary service to find a job. My skills always got me a better job that same day. But when the economy tanked in 2009 I went from making $79,000 after taxes to basically not working for eight months. It was tough, especially as we’d just bought a house. I worked here and there; I did 16 jobs with different companies but about 14 of them went under. That’s in an industry making things cold in the desert! Anyway, we were at ground zero, waiting for the end. Credits cards were maxed out, things were horribly bad, and then I get a call from a temporary service who had my details, and they sent me to RSI who were looking for instructors.

As a boy, what did you want to do when you grew up?

That’s difficult; the normal for most wasn’t the normal for me. I was on my own when I was 13, so day to day was just trying to survive. There were people on drugs, bad families, and I was on the street a lot. I got into things I shouldn’t have, did things I shouldn’t have, until one day it was time to not do that bad stuff anymore. I was at the point where my life was going to go one way or another, and thankfully the woman who became my wife decided she liked me, so we decided to do good stuff together instead.

I’m pretty open. I don’t lie so if people ask me a question about my personal life, it’s out in the open. But I guess most people don’t know I’m an ordained minister. Most students wouldn’t know that two years ago I had an accident with a traumatic brain injury; I died seven times on the way to the hospital. I spent 20 days recovering, and came back to work against my doctor’s recommendation for going on disability.

The way I think about it is that when something’s broken and stays broken, eventually it becomes normal. Some things are better than others. I was color blind most of my life until the accident, so the first month of being able to see colors was very disorienting. The bad side was that all of the nerves that go from my brain to my nose were severed. So I lost all sense of taste and smell, except salt and sweet. I’m Cajun and I love to cook and eat, so that was horrifying for me – not being able to really taste food.

Please tell us about your family.

My wife Melissa and I have been married 16 years. We have a 15 year old daughter and an 8 year old son. We’re all musically inclined; my daughter and I play the guitar. My wife and daughter both sing, and my son plays the drums and is just super artistic. He can draw anything. As a family unit, we’re very blessed. Things could be better, but we’re blessed. Melissa has always been good at everything. She had a rough childhood like I did. Her parents were drug addicts, but she chose a different path to me. I’ve known her since I was 14, when she my best friend’s little 6 year old sister. We got married young and decided to have a baby when she was just 18. But having both came from broken families, it was important for us to be part of something that wouldn’t break.

What’s the best piece of advice you’d give to new students who are just starting out?

The reason people come to RSI is to make their lives better. Nobody comes here because they’re bored. They come here to learn something new. Maybe you lost a job you had for 20 years, maybe you’re out of high school trying to get on the career ladder. Most come because they want to provide better for the people they love. But whatever your situation, if you want to do something that will change your life forever and give you options down the road, this is an excellent thing to do. The trade will always be here; it’s always changing which means the amount of money you can make increases as you learn more.

My sense of touch- my hands! Everything you do in this field involves temperatures. Even before you can pull out a thermometer, your sense of touch tells you what you need to know. You can reach into things and find broken parts before you can see them. You can find nuts and bolts before you get your tools back there. If you’re looking for something you can buy, I’d say my meters and gauges.

If you could choose to have dinner with anyone, alive or dead, who would it be?

I’d have to say Jesus; I’d want to talk to the one who knows all the stuff. But if you’re talking about our field, I’d say either Thomas Edison or Nikola Tesla. I call them the Prime Ministers of Electricity.

If you weren’t a teacher, what would you be?

I don’t know! I’ve gotten kind of fat and lazy so going into the field, even though the money would be a lot better, doesn’t appeal. The thought of all of the labor isn’t pleasant to think about. I guess I’d like to be independently wealthy, spending my days at the beach in Hawaii with my family, enjoying life!

If you were to tell one person “Thank You,” who would it be and what did they do?

My wife Melissa. If she wasn’t the person she was, and didn’t care about me the way she did back in the day, my life would have gone in a real different, bad direction. She gave me a reason to be a better man. She loved me, and that made me need to be better than the hoodlum I was.

I’d go pick up my wife and children and go to the park and have a picnic.