Daniel, 29, from Colorado, graduated the Electro-Mechanical Technologies program in February 2020.

Thanks for sharing your story, Daniel. What you did you do before coming to RSI?

After high school, I spent two years serving a mission for my church, and then another year working at Knott’s Berry Farm. I then spent about five years working for Microchip Technology, first in Colorado before I transferred to Chandler, AZ.

Sounds like a good company to work for. What made you change direction?

What brought me out to Arizona three years ago was my fiancée, now wife. I got kind of tired of the overnight shift at Microchip. It was a strain. We were newlyweds and I had four step-children, so that schedule put a strain on everything. It was so stressful. I wanted to get out of that.

How did you find yourself at RSI?

I got a job with Macy’s, working in their warehouse. I did that for about a year, including the time I attended RSI. One of my friends at the warehouse took a tour of RSI and gave my name as a recommendation, someone they thought would be interested in the school. The school called me up to invite me to take a tour. So I came in, filled out some paperwork and took a tour. There was also a job fair happening at the time. Between the fair and the tour of the school, I thought this career was for me.

Had you ever considered a career in HVAC before?

No, this was really out of the blue. I’d never thought about refrigeration, but I signed up there and then that day. I came home and told my wife I’d signed up for HVAC school. She was completely supportive.

No HVAC experience, but were you handy around the house?

Not really! I played with Lego as a kid. That was the extent of my building or mechanical experience!

I really enjoyed the class I had. We started at 12, and there were eight of us by the final phase. Being a smaller class, it allowed the teachers to really focus on us as individual students. The teachers were able to take their time to help us out individually. If they saw you struggling with a particular board, they could come over and help you out. 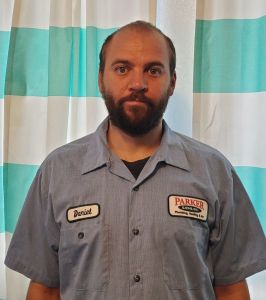 Did you have a favorite phase or subject?

The two parts of the program where I came into my own were the electrical classes, and then when we got into the HVAC stuff, I really got into the troubleshooting.

So you graduated a couple of months ago. Where are you working?

I am an apprentice installer with Parker & Sons. I’ll probably be an apprentice for the summer. Next spring I’m debating if I want to go into the service side.

Why are you debating that?

The service side of things is really what they focus on at RSI. It’s what I went to school for. They really don’t go too much into install. That’s one of the reasons I took this job. I wanted to learn more about the install side. But I’m finding that I enjoy putting in a new condenser. That’s why I’m debating it now. At first I was just going to do install for the summer, get it under my belt, and see if I could move on. But now I’m not so sure because I’m starting to like what I do.

How did you get the job?

I went to an RSI career fair. Parker & Sons had a booth. They had a display unit, and the rep had prospects actually wire it up. It was just a bunch of black wires. You had to wire it up so the unit would work. Wire up the motor, the capacitor, stuff like that. I did it and gave the guy my information, and he passed it on to my current supervisor. They called me in for an interview in early February while I was still in school, and they said, “Okay, you’ve got a job when you get out in a couple of weeks.”

What was it like getting your first paycheck in this field?

Honestly, my paychecks have only gone up. Even as an apprentice, I feel like I’m earning more than I was before, but almost more importantly, I also feel like I’m actually developing a skill, a trade. Before I was just doing something because it needed to be done. What I do now is something I can apply at home. I know how air conditioners work, so now I can actually fix mine. Instead of “I know how to drive a forklift!” What’s that going to do for me at home or anywhere else?

My long-term goal is to start my own A/C company. Probably residential at first, and then branch into commercial once I get some experience there. Bucheger & Sons, the next Parker & Sons!

What about business skills? Do they teach those on the EMT program?

It’s something I might need to learn on the go. I think their associate degree program might go into it a little—Mechanical Maintenance Engineering (MME)—but not in the EMT program.

Did you consider taking the degree program?

I opted out of continuing into that. I’d already done nine months on the EMT program while working at the same time. I figured I wasn’t going to have the time to do that program and start my new career in the field. It’s something I could do online. I haven’t ruled it out, I just want a break!

I feel more productive than I have before. Microchip was a production job, but I didn’t feel like I was being productive. At Microchip, I was just putting something in a machine and the machine was doing all the work. Being able to install a new unit, I’m building something with my own hands.

Are you still in touch with anyone you met at RSI?

I made some friends, and we still text from time to time. I was one of the guys who would go out of my way to help my fellow students. In fact, RSI has the Top Tech program. Every month they pick one student out of the class who would go out of their way, help other students, stuff like that, and I won that three times.

Show up, do your homework, and ask questions if you don’t know. Help others if they need help. A lot of the things I learned by helping someone else figure something out. If you can do all of that, you can succeed. I went into this school not knowing anything about this field and came out of it one of the top students with straight A’s and perfect attendance. If I can do it, anyone can do it. Just work hard and put in a little elbow grease!