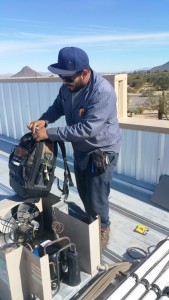 Jesse, aged 25, graduated from the Electro-Mechanical Technologies program in July 2014. Originally from California, Jesse has been in Phoenix most of his life. He now lives in Mesa, and works statewide.

Thanks for your time Jesse; why did you decide to go to HVAC school?

Out of high school I was a butcher’s apprentice, but that didn’t work out. Then it was an uphill battle with part-time jobs. You name it, I’ve worked it. I was going nowhere. I’d just got a job at Circle K, but the minute I put on that red shirt I thought “aw **** no”. I realized I had to do something different with my life. RSI was at the train [light rail] stop right in front of me, so I got off and walked in!

Had you any experience of the HVAC field before?

I have a good friend, Jason Miller, who used to take me with him on HVAC jobs on weekends once I got out of high school. He’d pay me a few bucks, $20, $30, $50, to go help him on jobs…but I soon realized that was peanuts compared to what he was making on the job. So, that was my first introduction to it.

So that’s what made you get off the train?

I’m just like everyone else, I need money. I saw how much Jason was making, meanwhile I’m packing groceries for $7 an hour. In hindsight I wish I’d started sooner because there’s so much money in HVAC, but I didn’t realize that when I was younger. I just thought of it as a construction job, and I didn’t want to do construction. It was either this or be a plumber, but the RSI program meant I could do this sooner.

What was your favorite part of the RSI program, and why?

I liked Advanced Troubleshooting. That was the class where I could apply everything I’d learned before.

It was just a week after graduation. I had eight interviews lined up one after the other. There were a lot of rejections because I had no real experience. But Artic Mechanical, a commercial HVAC and refrigeration company out of California, offered me a job. They told me I’d start as an apprentice, that I wouldn’t make a whole lot of money right off the bat, but I said, “I don’t care, let’s do it!”

I was really hungry for the job, not even for the money at that point, just the long term opportunity it would give me. I think I was more ambitious than my classmates who looked at residential or installer jobs. I went to school to be a service technician, that’s what I wanted to be, and that’s what I am.

How did you manage to get a job so quickly?

The last two months before graduation, all I did after class was spend time in the computer lab and with my Career Services Advisor, Ericka Baca, who was awesome! If it wasn’t for Ericka my résumé wouldn’t be so sexy looking. If it wasn’t for her sending applications out a million ways, I might not be here today. I was updating my résumé every day as I learned new skills, shooting applications left and right, making appointments. Most of the other students just went home. You’ve got to have drive to work, otherwise you’re not going to get a job.

After working $7 an hour jobs, what did you do with your first HVAC paycheck?

When I saw that first check, honestly I just about threw up! It was the most money I’d ever made! My first week I worked nearly 80 hours; I thought they were doing it on purpose because I was the new guy, but that’s just how it is here. I didn’t do anything special with the check. It’s going to sound lame, but I started buying tools. I had enough money to buy a truck, go to strip clubs, whatever, but I wanted quality tools. RSI gave us tools to get started, and they did the job in the short term, but I wanted “man tools”!

Where do you hope your career will be in three years?

That’s hard to say because there’s always a new thing. When I was in school I was hearing that chillers were the thing. Now, I’m in the field I hear that controls are the thing. So, really I’m just trying to climb the ladder and see where it takes me. In the 18 months I’ve been with this company, I’ve had pretty much a 50% pay raise. So I must be doing something good.

I want to grow up to be Hugh Hefner! Seriously, my dream job would be to work at a big hotel for instance, somewhere where I’m at a computer checking the controls. I don’t want to be an old man on a rooftop lugging 80lbs on my back just to make a living. One thing they didn’t talk too much about at RSI is that this is a tough job, especially in the summer. Being in the sun all day when it’s a million degrees outside is hard, especially if you’re going to be a technician.

At some point I want to be able to sit down and do this from a computer. That’s where the industry is headed – everything will be computerized. Not that I’m lazy or anything, but I want to pay my dues right now while I’m young, so in the future I can just sit down!

Did you leave RSI feeling more of a specialist in the field than when you went in?

I got my foundation down at RSI that’s for sure. One of my instructors would take us on “field trips,” and have us work on chillers and refrigerators out in the field. Some people I know who went to a community college, they didn’t do that kind of stuff. The best thing about the EMT program at RSI was “nine months.” If you can’t hang with something for nine months, you’re not going to be a success anyway.

What’s your favorite aspect of working in HVAC?

The best thing for me is that I’m alone. I did a lot of retail customer service jobs, and dealing with people all day, in that kind of environment, sucks. I love the fact that if someone tells me their air conditioner is broken, I’m up on the roof alone fixing it. I enjoy the problem solving aspect. Sometimes it can be frustrating, especially when it’s 100 million degrees outside, but truthfully, it’s the fact that I’m alone. Anyone who’s done retail customer service all day will know what I’m talking about.

But you have to deal with customers in this job?

Oh yeah, but it’s nothing compared to being a cashier for example. The customer interaction is there, and you have to have a sense of professionalism, be personable, and be able to talk to people.

If you’re planning to work as a technician, take time to consider the fact that you’re going to be in the sun all day. It’s a very laborious, construction-based job that requires a lot of endurance. When the sun is beating down, your brain starts to cook, and your problem solving skills start to slow down. When you’re in school learning the numbers, the theory, the concepts, that’s a lot to take in as it is. But you’ve got to get good at that stuff, so when you’re up on a roof in June you know what you’re doing and can do it quickly. You’ve got to be like “bam bam bam” and get off that roof as fast as you can.

Also pay attention and try to absorb everything. Don’t slack off in the last few months because you think you’ve got it. Keep applying yourself, because I promise you there will be a million more doors shut than open. Keep learning because this is an industry where if you don’t stay on it, you’re going to get left behind. Every so often something new comes up, and if you’re not up to it, you’re going to be stuck.

What do you do for fun Jesse?

All kinds of things, especially now that I can afford them. I like going bar-hopping and taking the family out to the movies. Anything that’s real fun costs real money. I’m just happy now that I can do that stuff.