Thanks for your time, Kevin. What you did you do after high school?

I went to community college to take my basic prerequisites. After that I didn’t really know what I wanted to do, so I dabbled in occupational therapy classes which I didn’t really enjoy. I actually took one intro class in an HVAC program, but it was computer-based, not hands-on. I was still trying to figure out what I was going to do, so joining the military seemed the best option for me. Colorado Springs is a big military town, and I have a military background through my dad, so I pretty much knew I would join the military!

Which branch did you join?

I joined the U.S. Army. It was over ten years ago, actually. I worked in logistics and communications. I knew I wasn’t going to be a career soldier, but I knew going into the military would allow me access to the GI Bill. I served for 10 years and separated in April 2020. I was in South Korea at the time when I was getting out of the military. It was kind of chaotic because of the pandemic and travel restrictions. It was a crazy time!

Thank you for your service. What brought you to Arizona and RSI?

My daughter and most of my family live in Colorado, but I used to be stationed at Fort Huachuca, down in Sierra Vista, so I have lived in Arizona. I knew when I was transitioning out of the military that I’d come back to Arizona or Colorado. I knew I wanted to go to trade school, so I googled trade schools while I was in Korea and RSI caught my eye. I saw the overall employment rate and the average salary of its graduates. I needed a career that would not lead to a financial hardship after 10 years of progression in the military. I think RSI, and the six-month RT program, found me rather than the other way round!

I would say the faculty, the teachers, and staff. They were great. They were likeable, knowledgeable, just good people. When I started the process of looking for a job, the career services team were incredibly helpful, structured and organized. I have to say pretty much everything the school told me when I signed up. It literally all happened for me. From the tour, to the hands-on time in class, to career services helping me find a job.

So, where are you working?

I was recruited by Parker & Sons as an installer. I walked into a job after graduation two weeks ago. Career services organized a company representative to come talk to us, to see who may be interested. Coming from the military this was really my first time going through an interview process, but it was pretty simple really. Career services also jazzed up my military résumé, to make it more suitable for the civilian world.

Is there a career path within the company?

Yes, there is a structured system for progression. I’m doing a three-week apprenticeship course, back at RSI actually right now, but after next week I should be out on installs. It’s a little installer crash course back at the campus. I’ll spend a year as an installer. Then I can move up to lead installer, which means I’m the main guy with a helper. After that I can switch over to the service department or go a different route. There are many different routes after the first year.

You’ve started at the bottom in this career after a 10-year Army career. Talk to us about money.

I’d reached the rank of sergeant over 10 years in the military, so I knew I would have to sacrifice a little now starting over in a new career. I wasn’t going to earn what I was earning as a sergeant on day one in my refrigeration career. But looking at the career options, I believe I can make it back to where I was in terms of salary within five years, if not sooner. As of right now I’m really just enjoying being a student of the trade, I’m embracing it, and soaking in as much knowledge as I can. 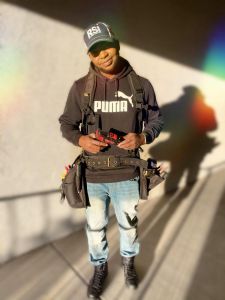 I’m open to anything. Maybe one day, I’d like to own my own businesses. But if not, I also wouldn’t mind giving back to RSI as an instructor one day, sharing the knowledge and experience that I build over the coming years with future generations.

I know you’re not out in the field yet, but what do you enjoy most about this trade?

Did you make some lasting connections at RSI? People you’ll stay in touch with.

I did. I made a lot of friends during school, along with faculty and staff. There was a good mix there of older and younger people.

You mentioned something you wanted to say to other veterans?

Yes, I’d like to say for veterans who are transitioning out of the military, really consider the trade schools. I feel like the trades don’t get as much notoriety as universities nowadays. I feel like the transition from the military to refrigeration and HVAC, in my experience, is a good process, an easy process. I just want them to take advantage of their GI Bill and know there are trade schools out there, like RSI, that will help you match up where you want to go and what you want to do in life. There’s a lot of flexibility out there.

Just hang in there. There will be everyday struggles but hang in there. School is like life. You have to put in what you want to get out. That’s my philosophy. So, as long as you show up every day and give it your all, you’ll get through it. We are all humans; we all have our ups and downs, but as long as you’re dedicated and you really want it, then you shouldn’t have an issue. That’s it.