Carl, 49, is a Commercial Electrical Instructor at The Refrigeration School. Born in Newport News, Virginia, Carl is a self-described “military brat.” His mother was Army and his dad was Air Force, so they traveled a lot. If he had to call somewhere home, it would be Washington state. That’s where he finished high school and where he lived for a while after leaving the Army himself.

Thanks for your time, Carl. How long have you been at RSI?

I started in November last year, so about six months.

How long have you been in the electrical field?

I’ve been an electrical contractor since 2003, so coming up on 20 years. But I guess I’ve been tinkering with it since high school. I went into the Army after high school in 1990. I was in communications, but I pulled wire, erected antennas, ran wire through trenches, stuff like that.

When I got out of the Army in 1996, I did some low voltage work for an alarm company for a while. Then I went to school in 1997 and got my Electronic Engineering degree. During that time, I got picked up by IBM. I had about seven different titles there, but eventually ended up being network administrator and project manager for the Washington Mutual account.

I did a lot of everything there. I did some programming, wiring, electrical and low voltage stuff. I was there for about six years. When I left IBM, I had one test to take to get my contractor’s license. So, I worked for a low voltage company for about six months. Once I my passed my final test, then I started working in my own business and pulling contracts.

Do you still have the contracting company now?

When you were a kid, what did you want to be when you grew up?

A pilot, I wanted to fly planes. I was fascinated with planes and speed. Birds always fascinated me, big birds, really. Hawks…because they were just fast. I just wanted to fly! But I was born with a stigmatism. I found out in high school that I needed 20:20 vision, so that killed that dream!

Why did you decide to get into teaching last year?

I’ve trained many apprentices, a lot of people, over the years. But my oldest son and daughter said that I should teach. I was like, “What do you mean? Why?” They just said I explain stuff in a way that anybody could learn. They felt that teaching would be something I’d be good at.

I thought about it. I was in a position where I had the time. My wife works from home, and if I’m bothering her, she tries to get me out of the house. I know teachers don’t make much money, but since I didn’t need the money, that didn’t bother me. So, I looked into it and to be honest, I didn’t think I would love it as much as I do. I also didn’t know if I’d be any good at it either. But, apparently, from what I’m hearing, I’m pretty good!

Even to this day, when I do electrical work and finish a job, I stand back, look at it, and I just admire it. It’s like, “Wow, I actually did that.” This is something that I can come back and look at for years to come and bring my family, my grandkids to see. I’ve been like that with my apprentices. I’ve got three apprentices who are just going crazy; they’ve got their own businesses and doing really well. With my RSI students, it’s the same thing. When you’ve got somebody for 20 days, and they come back and tell you they got this job in commercial electrical, and you’ve changed their life, I’m like, “What?”

When I’m teaching, I throw little tricks at them, and if they figure it out, I just stand back and think, “Wow, that’s something I taught them that nobody can ever take away.” That’s awesome. I tell the staff here that I don’t feel like I’m coming to work. I literally get to come here and talk about something that I love and that I’m great at, and you guys are going to give me some money? It’s just awesome! 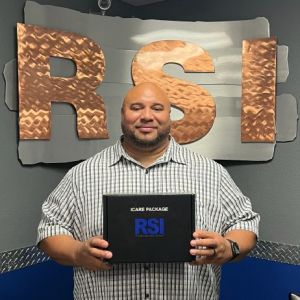 Honestly, my first wife. She passed away about five years ago, and I’d love to talk with her again. We weren’t married at the time she died, but we were pretty close again at the end. I’d like to tell her about her kids and grandkids. The things she’s missed out on.

Here’s something people won’t know. I gave up football scholarships, got married at 17, and joined the Army right after that. What’s more, my first wife my current wife, and I all went to high school together! I actually dated my Jennifer before my first wife.

Tell us a little more about your family.

Finish school. Especially when I found out that RSI has an associate degree program. I tell students that you’re in school right now, you’re already the putting time in for your six- or nine-month program, you’re already making time for school, so why not see it through and finish it with a degree? Put in a few extra months and get the paper. Because when you leave, you’ll get back to work and will be making what you feel is good money, you’re soon going to say you don’t have time to go back to school for a degree and it will never happen. So, since you’re in school right now, finish it, see it through, get the degree.

And that’s not me promoting RSI, it’s me promoting you. A degree isn’t going to make you smarter than anybody else, but it’s going to show employers that you can start and finish something, and that gives you leverage over your competition. If it comes down to between finishing school and you keeping your job or getting this other job that’s going to pay you great. stay in school. There’ll be other better jobs once you have your degree. Once you have that paper, once you have the trade, nobody can take it away from you.

If I didn’t make the gym, which I normally do in the morning, I’d go work out. But if I want to relax and just have “me time,” I’d go to the movies. I’d find a good movie, sit in the movie theater, and eat popcorn.

I love troubleshooting, so I have to say service work. I love getting a call from someone who has had five other contractors come out, and nobody can figure this thing out. I love going out there and fixing it. I’ve yet to fail to fix something when I’ve taken a call like that. To me, that is the most gratifying thing. That’s why I believe I am so good is because I take the time. I just won’t give up until I figure it out.

My parents. I was blessed to grow up a two-parent household. My mom and dad, who are both military. My mother was hard on me. She was strict. And my dad, to this day, I don’t think anybody is smarter than he is, even though he tells me there are smarter people. But he always pushed me to find the answer, strive for more, and never accept being mediocre. He always told me, “No matter how good you are, always know there’s always someone better. But that doesn’t mean you stop trying to be the best.”