Edward, 32, from Phoenix, AZ, graduated from the RSI Electro-Mechanical Technologies (EMT) program in August 2012. Edward now lives in New Hampshire with his wife Katherine, and their daughter. They also have a baby on the way.

Thanks for your time Edward. Tell us what you did after high school.

I started working at Home Depot as a cart attendant. I wasn’t making much, so I got a second job doing sales at Fry’s Electronics. I did that for five years, kind of drifting. I lived with my grandparents, and I wasn’t sure what I wanted to do. I thought I’d just wing it for a while. Two years became five, before I made the decision to reach out to RSI.

My parents weren’t around, so it was hard for me to get student loans or grants without their input. It was a real challenge. RSI told me that I could start applying for loans as an independent student once I was 24. That kind of worked out perfectly. It was the right time to make some important decisions to further my education. I realized I wasn’t going anywhere, or acquiring any meaningful skills that could translate into a career. I was going 100 mph, but going nowhere.

My grandfather was an HVAC tech; I asked him about his career, as I didn’t know much about it. He told me that the skills he’d learned had provided him job security for life, no matter if he was working for a company or for himself. It’s knowledge that he will have for the rest of his life. No one can take it away from him. He talked about how good that felt, and how he was always able to put food on the table and a roof over our heads. To me, logically, it sounded like something I should do. Growing up, I had no stability; it sounded like an opportunity to give myself and my future family the stability I never had.

The hands-on part was huge for me. It’s one thing to read something in a book or watch a video, but it’s a whole different experience to get your hands on some equipment. I found the solar course fascinating.  I wanted to learn more, so while in class, I got a job with a company that built solar panels. I figured getting a job would help me absorb more of the information.

Did you work throughout school?

I always wants to learn more. Shortly after I finished the electrical courses, I went to work for a different solar company that installed solar panels. I was running the wire and setting up inverters. A few months before the end of the program, I actually asked if I could take the EPA license test early because there was a residential air conditioning company—Arizona TradeMasters—that was willing to hire me once I got my license. So I got my license and started working for them a couple of months before graduation.

How was it getting your first HVAC paycheck?

It was very different! After Home Depot and Fry’s where I did a lot of work for a little pay, getting that first HVAC paycheck was nice!

What shift did you do at school?

I did weekend classes; it was two long days Saturday and Sunday. I don’t think they do them anymore. That’s why the program took a year, rather than the nine months it takes now. Less hours in the week. 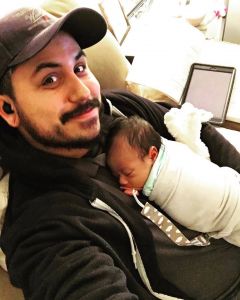 Where did you go to work after graduation?

I stayed with Arizona TradeMasters for another year and a half. They are really good guys; they saw something in me and gave me a chance. I only left because I met my girlfriend, now my wife, who is from New Hampshire. She was heading home, and I decided to start applying for places up there.

So who did you work for when you got to New Hampshire?

Capstone Mechanical in Portsmouth. It was a commercial job, so I stepped up to bigger stuff. I worked there for five years. They were awesome to me as well. I told them I didn’t have much commercial experience, but they put me in a truck, sent me out on my own, and told me to figure it out!

Where do you work now?

I’ve been with Bosch Thermotechnology for a little over a year. I work in the thermotechnology department. I troubleshoot everything from gas tankless units, to boilers, to air conditioning units, to solar systems. I help engineers troubleshoot. I help design applications. I guess you could say I use my brain more than my body now. With the winters up here, it’s nice to be inside and not out on the road.

I realized I was good at problem solving. It’s like playing chess. There’s no one way to solve everything. There’s a feeling of accomplishment when you step out of your comfort zone, challenge yourself and figure something complex out. Every day is different. I also enjoy making people happy when you fix their problem! I still get that same feeling at Bosch, except that it’s on the phone now!

What is your career plan from here?

My brother-in-law and I have an electrical business together, Ion Electrical. We just had our three-year anniversary as a business. In February this year, we got to the point where we had grown enough to allow him to leave his regular job as a Master Electrician. Our plan is for me to do the same by August 2020. I’m putting together a plan to start an HVAC department, so when I come on board it’s a well-oiled machine. I want to retire by the time I’m 45, so I’m doing everything in my power to make that happen.

Have you always wanted your own business?

I never thought I’d have my own business, but after a while, I became more ambitious. Everything I learned from RSI and being in the trade for six years has gotten me this far, now I want to be seen as a 21st-century electrical and HVAC company. I want us to be the Tesla or SpaceX of the electrical and HVAC industry.

Did you make some connections at RSI?

I made two really close friends at school and we keep in touch today. They both still work in HVAC, in Phoenix and in Pennsylvania.

Making the decision to go back to school is daunting. Put aside any misconceptions you have about yourself, or what other people think or say about you. Just take the opportunity to learn something new, or to expand your knowledge if you have a background in the field.

Set small, simple, realistic goals. Don’t put a lot of pressure on yourself. Get through the first day. Keep your phone on silent in your bag so you’re not distracted. Try to get the front seat so you can clearly see the instructor. Small goals help set good habits. Fine tune your discipline. If you can do that, then the learning comes easy. Going to RSI changed my life in ways I couldn’t even imagine. It taught me things I didn’t know about myself. The only way to grow is to work hard and step out of your comfort zone. If you can make it out the other side, you can definitely reap the benefits and enjoy the fruits of your labor.