David, 55, is the Senior Director of Training at The Refrigeration School. David has the unusual distinction of having been born at Williams Air Force Base in Mesa, which is now Phoenix-Mesa Gateway Airport! 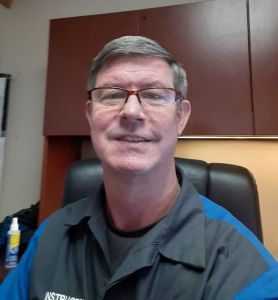 Thanks for your time, David. How long you’ve been at RSI?

About five and a half years. I applied as an HVAC instructor, and after the interview, I was told I would not be a good fit! They thought I was overqualified with my education and experience. So I actually enrolled as a student! When class started about six weeks later, I was sat downstairs and the Director of Training at the time said, “You look familiar.” I told him I’d interviewed with him about six weeks before. He said, “Oh, you’re back for another interview?” I told him no and that I’d enrolled at RSI. He looked surprised and said, “Wow, you were serious about this!” He set me up an interview that afternoon and offered me a job!

That’s really interesting. Did you complete the program?

No, I actually was in the program for less than two days. About three weeks later I had my instructor shirt on, and I was sat in the back of the class with the same students I was in class with originally! I first taught Fundamentals of Electricity, which is our phase one course.

When were you promoted to Director of Training?

Tell us about your background. How long have you been in the field?

I’ve been in electrical and air conditioning, and all forms of building and construction for about 33 years. I started on residential construction sites, picking up trash. Then I moved into framing, siding, and roofing. Then I joined the military. I was in the U.S. Army for a couple of years. I’m third-generation military.

Thank you for your service. What did you do after the Army?

I went to DeVry University and became an Electronic Technician. Then I fixed flight simulators for the U.S. Air Force as a Department of Defense individual for two years. Then my brother-in-law’s father got sick, and he owned an air conditioning and heating business. He had just married my sister, and I agreed to help him out till his dad got better. Unfortunately, within about three months, his dad passed away. I stayed with him until he sold the business about two years later. He was the one who trained me in HVAC.

Was there any carry-over from your Electronic Technician education into HVAC?

Absolutely. You need to know the fundamentals of electricity. You need to learn how to be smarter! After that job, I went back to school and got a degree in Electrical Engineering. I then worked for Motorola as an equipment maintenance guy. I worked on all their machines for almost five years before I got hired by Blue Cross Blue Shield of Arizona. I was involved with building their brand-new data center. I was the layer between facilities maintenance and the IT department. Anything that came in or out of that data center, I tracked it, installed it, helped build it… I did that for about 15 years.

What did you want to be when you were a kid?

I thought I’d go into the trades, maybe automotive or something. The hands-on skills appealed to me.

Why did you decide to become an instructor?

I was no longer able to do the 90% hands-on that I loved to do. They forced me into project management, which I did not enjoy doing. I’d made enough money so that I could afford the pay cut to come here as an instructor.

I would say my father because he gave me the freedom to fail. He allowed me to make decisions, even though he knew they were emotionally based. You learn most from your failures.

Why did you choose to come to RSI?

When I left Blue Cross, my choices were to go down to ASU, put on a suit and tie, and teach engineering classes, or come back into the trades, which is what I really love to do. So I visited all the Valley schools, and being really analytical and type A, I looked at each program to see which one I’d like to take as a student. I knew that would be the environment where I’d be comfortable teaching. RSI was very, very methodical in its approach, and it was very student-centric. That’s why I chose RSI.

You still teach at night. What do you enjoy most about teaching?

I do. The most enjoyment I get is the once that lightbulb clicks on, where maybe for the first time in their lives, they realize education can truly be fun and that they do have the ability to learn anything. I like that, as an instructor, we’re able to take really complex things and break them down in a way that everyone can understand. I truly believe that intelligence is relative to the subject. For example, if they know baseball stats, they’re smarter than me when it comes to baseball, because they know baseball stats. A lawyer is not any smarter than me. He or she has just studied the law. I’m not smarter than anybody. I just happened to study engineering.

I built a cannon from scratch! A friend of mine is with an Arizona based reenactment group for civil war battles. They have full-size replicas of civil war field pieces. I like them, but I didn’t want a huge one. So I bought the barrel from a company, and I bought the actual engineering diagrams for every piece of the cannon. Then I spent over three months building every wooden piece, every metal piece. I now have a one third scale No. 1 field carriage, a six-pound Howitzer, in my living room!

There’s actually two; I never got to meet my grandfather. He was a Brigadier-General working directly for Douglas MacArthur. I would have liked to have met him. The other person I would really love to sit down with is the Reverend Martin Luther King.

Tell us about your family David.

My wife Pam and I have been married 25 years. We have two sons. Our 23-year-old went through the six-month Refrigeration Technologies program here at RSI and is now a full-time contractor with Intel. Our 19-year-old so has a full scholarship to ASU, where he is studying Psychology.

If you didn’t have to work for a living and could do anything, what would you do with your time?

I honestly would still teach the trades, but I’d probably do it in a grade school or early high school environment. That is the group you can most excite that education is fun. You don’t need advanced degrees for you to make millions, if you want to make millions.

There are two pieces. The first: Only you can limit you. The second: Stay humble and hungry. If you do that, those with the skills you seek will share their mistakes with you, so you don’t have to make them.

I’d go in the garage and either build a piece of furniture or one of these light-up Christmas display things, or I’d do stained glass. I might also play my guitar and write music, because I rarely get the opportunity to do that. Besides being here at RSI, I run my own business. I’m a licensed, bonded HVAC contractor.

My knowledge, my brain, my ability to think out of the box. I know it sounds like a cliché, but tools are there to help you gain information. That’s what a meter does. It provides you with information so that you can make an analytical decision of exactly what’s wrong with the system. You also need a great personality, a heck of a sense of humor. You also have to be compassionate; you can’t fake being genuine.

I think that we’re able to bring comfort to people. In this trade in Arizona, you could show up when someone is at risk of dying of heat stroke. Within a short period of time, you’ve made their life better. You get instant gratification that you were able to use your skills to truly help somebody out. There’s a reason they didn’t shut down our skilled trade here during COVID, because we are first-line responders. We are making sure that people are comfortable in their homes, that they have fresh food to eat, and they have their medicines. You can also make as much money as you wish. How hard do you want to work?