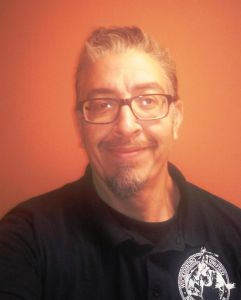 John, 44, originally from southern California, moved to Phoenix, AZ in 2000. He first enrolled in the Mechanical Maintenance Engineering (MME) associate degree program in 2002. But then life got in the way… 15 years later he came back to RSI and graduated from the degree program. Here’s his story…

Thanks for your time John. What did you do before moving into HVAC?

I was trying to get involved with screenwriting but that didn’t work out too well! I had to find something else. I’d just got married and was looking for a job. My wife suggested more training, so we looked at RSI. She had the brains of the family and thought that doing the MME program at RSI would offer an all encompassing education. So, I enrolled in the degree program in 2002 when I was about 30.

Was she right? Was it all encompassing?

As you move through the program, you come to see that’s true. It applies to almost every single trade, except maybe carpentry. It has electrical, mechanical, refrigeration; it’s got installation – stuff like that. It just blends a little of everything. Her idea was that it could help me in other fields as well.

A few months into the program, my wife got sick. She was our primary breadwinner because I’d been in a car accident. I was going to school and learning while I was healing. But when she got sick I had start earning some money. I went to the Career Services department at RSI and looked for a job fast.

You had to quit the program and start work?

I quit the MME degree program, but I’d already completed the EMT [Electro-Mechanical Technologies] part. I just barely graduated because of my wife’s illness. I started working in the field at Fort McDowell Casino. They hired me as the grunt HVAC guy in 2003. My wife passed away in 2006.

Our condolences John. How long did you stay with Fort McDowell?

It was about two and half years I guess. After Fort McDowell I worked for Sears as an appliance technician for maybe three years. But after the Sears job, my self-esteem went down the toilet. I got out of the HVAC field and started taking menial jobs. I don’t know why. I was just down on myself. I guess we all have patches where our brains cease to work and we make bad decisions.

So what got you back on track?

I got hired as the HVAC technician for the Wickenburg School District in June 2015.

You weren’t in a great place, so how did you get that job?

It felt like a miracle. I was working as a groundskeeper/maintenance guy at a private school in Wickenburg. I was getting tired of it. I just happened to go on indeed.com and there was a posting for an HVAC/light electrical technician for the school district. I thought I’m not going to get the job so I might as well just apply for it! I figured it was close by so I might as well.

It worked out though?

I met with a guy named Bill Moran. I want to mention Bill and thank him, because I would not have the success I have right now if it wasn’t for him. He didn’t have an HVAC technician for the five schools that they oversee. Nobody had done any preventative maintenance at those schools in 20 years. He had to jump into the job when another guy left.

He offered you the job then?

I said if you offer me the job, I’ll take it. It was just me and one other person that applied. It was a Godsend that the other guy didn’t go to RSI because as soon as I asked for my EPA certification and all my paperwork, RSI sent it over the same day. That really helped me get the position. I think that Bill honestly took a chance on me because, at the time, I didn’t have the experience he was looking for. 18 months on, with my degree under my belt, I think it’s worked out well for him and me.

The job is just monumental and to this day I’m the only HVAC guy for 400 units. I’m the lead tech/ supervisor/manager for the school district servicing 400+ units: including boilers, cooling towers, pumps, ice machines, you name it. We’re retrofitting the schools, starting with the high school, this summer.

What brought you back to RSI to complete the MME degree?

Honestly, it was a divorce. I’d got married a second time. My whole attention was on my wife – making sure she was happy, taken care of, but it never seemed like enough. So when that ended, I had the time to reflect back on the stuff I’d always wanted to accomplish for myself. RSI was top of that list. I wanted to go back and do something for myself rather than do stuff to please someone else.

So did you complete your classes online?

I had to complete the Solar class on campus before I could move on to the online MME classes. The Solar class wasn’t part of the curriculum 15 years ago. That was probably the hardest part. It was June/July so we were deep into the summer. I was working two jobs and had to drive from Wickenburg to Phoenix four days a week for a month. It was just horrible in the heat and traffic.

Did your work cut you some slack with your schedule?

Yes, I have to say Bill has been very supportive about everything really. As long as it benefits me and my family, he’s all for it.

What did completing the program give you?

Like I said earlier, I think it’s relational. It starts with the smallest motor or maybe the relationships between pressures and temperatures that they cover in the early classes. But, they actually build up all the way into big industrial commercial & equipment like cooling towers and centrifugal pumps. That stuff is covered in the MME program, and when you go through that, it kind of solidifies more of the foundational principals from the earlier classes.

Where do you hope your career will move you?

I’m very happy at the school district, but I want to get into some kind of management position at some point. I’d like to be a hands-on manager. I’d like to be supportive of younger techs, helping people understand the trade. I think that’s where I’d like to be as far as the trade is concerned, but I have my own personal goals I want to meet too.

What’s your favorite aspect of your new trade?

I’m kind of an empathetic person. So regardless of how angry somebody might be that their A/C is out, there is the satisfaction of being able to fix something. The feeling of helping somebody out is a big deal. It’s something to be proud of. You can hold your head up high and say, “I’m smart enough to fix someone’s air conditioner. I can help people.”

If they’re looking for something that is challenging to their mind and challenging to their perspective on life, I think it would be a good choice. Air conditioning and refrigeration swallow up so many other trades that they’re not just learning about A/C and refrigeration. They’re learning the electrical side, controls, voltage systems. They’re learning so many things that are intertwined. If they were to apply what they learn to a different job, or even apply it to a different degree like computers, it would be beneficial.

I’d also say to never listen to negative thoughts about it. Those thoughts can completely destroy you. Think positively about your future and the choices you make. If you choose HVAC, stick with it and don’t listen to any naysayers – people who would try to put you off pursuing your career.

What do you do for fun John?

I do southern Chinese martial arts. It’s called the Hung Gar system. It has low to the ground stances and features short, powerful punches. It’s also called Tiger & Crane 108. I’m also working on a science fiction book. After the divorce everything kind of opens up, and I wanted to make time for the things I enjoy.

You mentioned your first wife passed, and you’re also divorced. Is there a lady on the scene now?

No, I’m too scared! The dating world has changed and not for the better. I do have two daughters from my first marriage – Abigail is 13, Hannah is 15. They’re proud of me for going back to school.

I’d give God his cut. The rest I’d probably buy a home and put some away for savings.