Understanding superheat can be essential to understanding and troubleshooting some refrigeration issues.1 This article will explain superheat for anyone considering becoming an HVAC technician or who might just need a refresher after completing their HVAC training program. 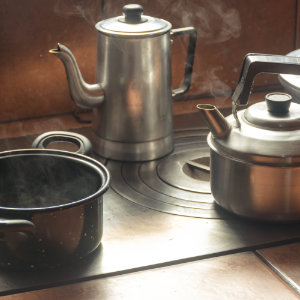 First of all, we all know that most elements can exist as a liquid, gas or solid. Of these three states, only a gas (also sometimes called vapor or steam) can be superheated.1

Superheating occurs when a gas is heated above the boiling point of that element in its liquid form.2 For example, water boils at 212 degrees Fahrenheit at sea level.1

Imagine that you put a pot of water on a stove burner. The water will heat up until it reaches 212 degrees F, or its boiling point, and it won’t rise beyond that temperature while it is in liquid form.2

If you use a thermometer to check the temperature of the boiling water in the pot, the water won’t ever heat past that point of 212 degrees F. (The rest of the heat is called latent heat because it is “hidden” from the thermometer.)1

Saturation is a term to describe the point where a substance changes state, such as from liquid to gas or solid to liquid. In our example of boiling water, saturation would be the boiling point of 212 degrees F. When the substance has been heated above its saturation point, it has been superheated.1

Superheat is calculated as the difference between the saturation temperature of a substance and the actual temperature of the gas.3 When it comes to HVAC, refrigerants often boil at much lower temperatures than water.

For example, if a liquid refrigerant boils at -10 degrees and is then heated up to -5 degrees, it has been superheated by 5 degrees, even though it is still a negative temperature.1

Understandably, this can be confusing at first for new HVAC technicians, but just remember that superheat is the difference between two numbers: the saturation temperature and the actual temperature of the gas.3

Calculating superheat is important because this reading can tell an HVAC tech how far liquid is making it through the coil of an evaporator. Higher superheat means there is less liquid and more gas in the coil, which can lead to compromised system capacity and overheating.3

Lower superheat means there is more liquid and less gas in the coil, which could lead to compressor flooding and damage. Calculating superheat correctly requires an HVAC technician to check both the temperature and pressure simultaneously at a location.3

When should superheat be calculated? Superheat should be calculated when a technician is doing an equipment start-up or analyzing an operating system problem. The system needs to have already been operating for 15 minutes to achieve a steady state before taking the reading. Then, the superheat reading can be compared to the manufacturing or industry standards.3

When beginning a new career, making mistakes as you learn is to be expected. Here are some common superheat mistakes new HVAC technicians might make:3

Learn about Superheat in HVAC School

Superheat is an important measurement for HVAC technicians to understand. While this article is an overview of the concept, you may be able to learn more in HVAC school.